As two young constables dash into the room of silently seated police men and women, making breathless apologies, one of them asks: “Have you started yet? We’ve been out on an eviction but we didn’t want to miss the meditation.”

This is lunchtime in inner-city Salford’s fortress-style Pendleton police station, and the man with a pair of Tibetan chimes facing the group is neighbourhood police officer, PC Ewen Sim, poised to deliver a session of mindfulness.

The bearded 39-year-old is one of 13 Greater Manchester police (GMP) officers who have volunteered to train as advanced mindfulness practitioners to deliver this secular form of meditation across the whole of GMP. The aim is to combat escalating absenteeism and stress across the 11,000-strong force.

“There’ll be no hypnosis, beanbags or joss sticks today,” states Sim to his colleagues, some of whom look tense and sceptical. Many are still wearing their body armour, with radio sets at their shoulders.

He explains that if stress is like a train, then mindfulness is “about giving you something to get yourself off it – a couple of stops before it hits the buffers”. In the hour that follows, Sim’s voice slows as he promises a “full-file approach” (police speak for “evidence-based”) to mindfulness. He presents some science, acknowledges the stark reality they all face, of policing Salford in an era of austerity, and then takes the mixed-rank group of a dozen men and women through two meditations – one encouraging “focus on the breath” and the other deep relaxation.

For some it’s their first experience of meditation. Others are coming back for more. In the seconds following the ching of the Tibetan chimes, a gentle snore creeps into the silence and another officer surreptitiously mops his eyes with a tissue.

Stress, anxiety and depression are a major problem for all UK police forces. The number of police officers and police staff taking time off for psychological reasons went up 35% from 4,544 in 2010 to 6,129 in 2015, figures released to the BBC under the Freedom of Information Act show. It is now the main reason for long-term absence.

Greater Manchester police’s sickness levels escalated by 20% from 2013-2014 to 2014-15. The equivalent of an entire GMP division (just over 460 staff, on average) is lost to sickness each day, at a cost of more than £17m per year (based on the average salary of a police constable). Anxiety and stress accounts for 28% of all sickness.

But mindfulness for stoic coppers? Chief superintendent Zoe Sheard is the wellbeing lead for GMP. She answers an adamant “yes”. “My view is that mental health is as important to a police officer as physical health.” she says. “We want them to go out and deal with conflict, but those same people will also have to deal with victims too – with compassion and often in the same incident. Mindfulness is about keeping them fit for each role. There’s nothing mystical in this – it’s just practical.”

Growing evidence indicates that the integrative, mind-body based approach developed in the 1970s by Jon Kabat Zinn helps people to manage their thoughts and feelings. It is recommended by the National Institute for Health and Care Excellence as a preventive practice for people with recurrent depression.

Even the US Marines have experimented with the technique to build resilience. A study in the American Journal of Psychiatry (2014) found that the heart and breathing rates of mindful Marines returned to normal faster than those of the control group members after exposure to stress. 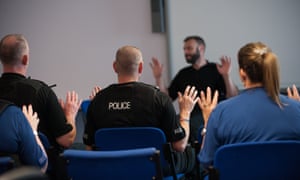 GMP had carried out a number of surveys over the past three years and identified mental health as a major problem. Sheard presented mindfulness to her senior colleagues as a way of maintaining staff health. Despite some raised eyebrows, around 100 police volunteers received an introduction to mindfulness, and of these 41 decided to try a four-week intensive course one day a week. A further 13 (including Sim) were trained to teach the practice to others.

With Sheard’s support, Sim was taken off his normal frontline duties after presenting a business case for delivering mindfulness to his colleagues in the Salford division over a six-week period. Attendance is voluntary. For some it’s a one-off. Others have attended several sessions on a weekly basis. To date, 250 police and back-office staff, out of close on 700 staff, have attended Sim’s sessions. Similar projects may be set up across all 12 GMP divisions.

Sim, who is a practising Buddhist, is clear that mindfulness is not a magic bullet, but he sees it as a “strengthener” for colleagues who face a daily threat of assault, and sometimes have to operate solo. He says: “If you go to traumatic incidents day-in, day-out, as we do in Salford, you don’t know where [in your mind and body] that stress is being stored.”

He was drawn to mindfulness after suffering anxiety following a divorce, on top of an already stressful job. He has to deal with sceptics. PC Steve Hough was one of them. After two cardiac arrests in three years he was struggling mentally, but initially wrote mindfulness off as “not for me”. He went back out of desperation. The third session – which he’d decided would be his last – changed everything for him. Hough says: “I came away feeling as though I’d had a power nap and that stress-free feeling stayed with me for the rest of that day. I’m looking to keep that going. The breathing exercises were particularly good and I use them to help me to sleep.”

PC Cath Hangnail, who is on the beat in Pendleton, does too – particularly when she changes shifts. She says: “I think it is fantastic. In this job you never know what you are going to face in a day – it could be anything from death to shoplifting. In the mindfulness session I went into my own little world and I came out walking on air.”

The impact of GMP’s mindfulness experiment is being evaluated at Manchester Metropolitan University and GMP chiefs are considering how best to make the technique available across the force. The Police Mutual society is considering funding a national pilot in Greater Manchester for its application to more senior police leaders.

Back at Pendleton police station, Sim is preparing his group of super-relaxed police officers for going back on shift, instructing them to raise their hands, palms forward and waggle their fingers (“jazz hands” style) and move their arms and legs: “Right, before you go back on patrol, go and have a bite to eat and a rest,” he says. “I don’t want you going out and doing jazz hands as you go about your work!”